I think things that are hideous and bad are cool. (..) This phemenon has been called post-irony (..) „Post-irony“ is the sarcastic liking of something that you are aware is uncool. Irony, really, kind of fits that same definition, but post-irony is usually defined by sincerity, whereas with standard irony everyone is aware of your sarcasm.
This makes it all but impossible to determine when someone is being ridiculous and when they are pretending to be ridiculous. To us uncool people, post-irony is the greatest thing ever. Nerdy glasses and T-shirts with stupid slogans on them like, „I can only please one person a day. Today is not your day,“ are what I wore in high school as a result I was considered somewhat of a loser. Now, however, I can wear the exact same outfit and be cool and disinterested in a post-ironic way because now I am totally aware of how stupid that crap is.
But there is a line. There is still stuff that isn’t cool, even in a post-ironic way. For instance, there was a brief period of time in France last year where bulky, plaid jackets were the hip clothes. And we are all aware of America’s post-ironic love affair with trucker hats. But Alaskan ice road truckers, despite wearing those hats and jackets, were never cool. There’s a juxtaposition between a skinny, handsome kid and the trucker hat that isn’t there for a hemorrhoidal truck driver.
This juxtaposition is the core of post-irony. (..) Post-irony is complicated but ultimately boils down to this: anything is cool. 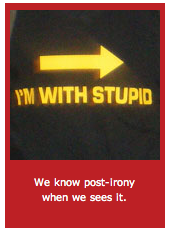 (written by Mark Johnson, an unprofessional writer who drinks too much and smokes too little. Witty, unconventional, cavalier, badass: all terms rarely used by others to describe him. Mark takes nothing half as serious as perhaps it should be taken; to date, this has not gotten him physically harmed, but he worries. His personal blog is available at whynotjustblog.blogspot.com) END_OF_DOCUMENT_TOKEN_TO_BE_REPLACED

Cosmopolitan Tribalism from box1824 on Vimeo. 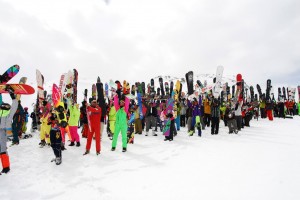